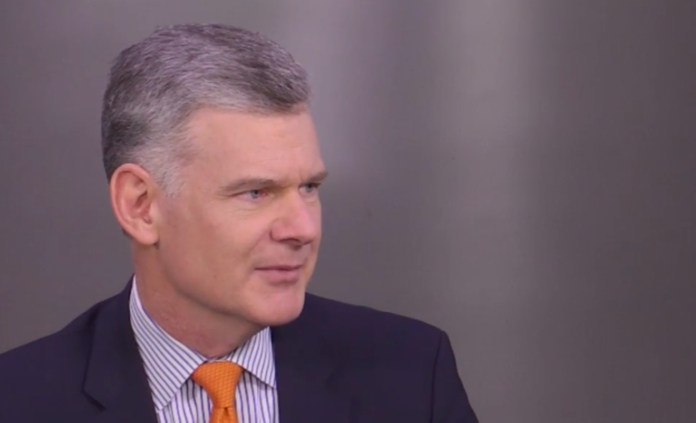 It’s a perfect storm for the U.S. economy, one that won’t end well for the Dow Jones Industrial Average.

Mark Yusko, Morgan Creek Capital Management CEO and CIO, painted a grim picture for the foreseeable future, advising investors to run as fast as they could away from U.S. equities.

In a webinar entitled “You Ain’t Seen Nothing Yet, Why the Equity Bear Market Is Just the Beginning,” the investment advisor rattled off a laundry list of headwinds threatening the economy and corporate America. In addition to running a global equity long/short portfolio, Morgan Creek, which reportedly boasts more than $1 billion in assets under management, oversees a blockchain venture fund.

If he’s right about what comes next, an economic downturn the likes of which have not been seen since the Global Financial Criss is closing in. The Dow and S&P 500 have held up well year-to-date, but it’s a farce propped up by stock buybacks and too much debt. Yusko is in the earnings recession camp, predicting that falling profits will persist for much of 2019, at least.

“It’s going to get worse in Q2 and Q3 even though people think [it will get] better…Earnings are going to go down for at least two more quarters. It’s going to be ugly for stock prices.”

The rate at which corporate America has been slashing earnings guidance has been an “absolute disaster in Q1,” said Yusko, suggesting that it’s a recipe for an economic recession. He pointed to stock indices, saying that there’s “too much money in too few stocks,” much of which is directed into growth stocks. In fact, FANG stocks (Facebook, Apple, Netflix, and Google’s Alphabet) will be “dead money” for the next two decades. That’s a far cry from the “greatest investments of all time,” which are Berkshire Hathaway, Walmart, and Microsoft, the latter two of which are in the Dow.

While signs of a global economic slowdown have been surfacing for the last year, stocks have been in the longest bull run in history. Even though the Dow is up year-to-date, it’s about flat since September 2018, a stretch in which investors haven’t made any money.

Meanwhile, valuations have become rich. On average, stocks are 91% overvalued, a dynamic that is second only to the 2000 tech bubble. Now that the pendulum is about to swing in the opposite direction, investors may want to take their profits and run.

“2018 was the peak. We’re in a crisis,” warned Yusko. “We’re probably going to see as deep a recession as the Global Financial Crisis.”

His advice is to sell growth stocks and buy value.

DEJA VU ALL OVER AGAIN
What’s happening in corporate America in some ways is like a broken record. Companies owe a ton of money, levels that are “5x higher than in 2000,” yet their cash coffers have been depleted.

“This ends so badly. There will be so many bankruptcies. And a credit bust will happen in 1.5 years from now. It will be Enron 2 and Worldcom 2 a year and a half from now. Again, you ain’t seen nothing yet,” warned Yusko, who advises investors to sell in May and go away.

Yusko might be down on the Dow and the economy, but he is a bitcoin bull.

“Bitcoin is the best returning asset in the history of all assets over the course of its life…Why is bitcoin so awesome? Even in the bear market, fundamentals have been expanding.”

He points to a “virtuous cycle” in which a combination of a rising price, profitable mining, secure network, and strengthening demand for BTC as a store of value all fuel itself.

Meanwhile, stocks aren’t all bad. Morgan Creek was an early investor in Lyft and has done “very well despite the drop in the public price.”