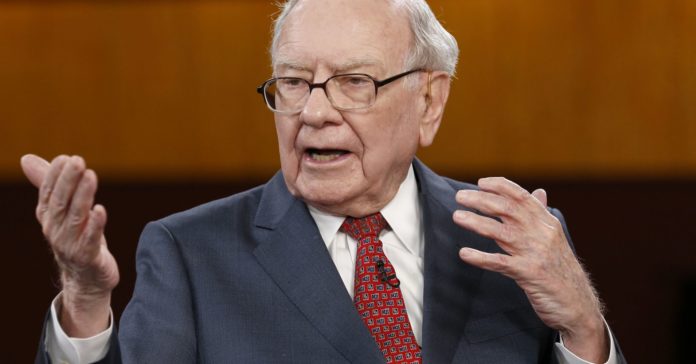 Warren Buffett may be a Democrat, but that doesn’t mean he’s on board with the economic policies promoted by progressive firebrand Alexandria Ocasio-Cortez. The congresswoman from New York plans to ramp up spending and drive the US deficit closer to the cliff-edge with a $40 trillion indulgence. Speaking in an interview with Bloomberg, the Oracle of Omaha made it clear where he stands on the issue of Modern Monetary Theory, and the inflationary risks it could create if a plan such as AOC’s is adopted in the future.

“I’m not a fan of MMT — not at all, We don’t need to get into danger zones, and we don’t know precisely where they are.”

Clearly, Mr. Buffett is one of the old guard when it comes to a fiscal approach. It is quite ironic that a man who is benefiting more than anyone else from the Fed’s monetary stimulus is now pushing back against continuing down this road. Just look at the performance of Berkshire Hathaway stock since the Fed put the economy on life support.

THE DEBT CEILING IS NOW A POLITICAL WEAPON

I always respect people who push back against policies that benefit them, but they are ideologically opposed to. Of course, Warren Buffett might just be worried about AOC blowing up his portfolio, who knows.

Buffett also dislikes the use of the debt ceiling for political means, distrusting those who would wield a precarious economic situation over the heads of the American people.

“It’s just ridiculous to be able to use the debt ceiling as a weapon in terms of other fights. The problem with having a debt ceiling is that it can be used for extraordinary mischief or, in effect, the blocking of government.”

INCREASING SPENDING ALLOWS TRUMP, AOC TO GIVE THEIR BASE WHAT THEY WANT

I have written before about the similarities between Trump and Ocasio-Cortez in their political playbooks rather than their views, and the use of spending to give their base what they want is another example.

Yes, from a humanitarian perspective AOC might have the apparent high ground, but if her plan blows up an already fragile debt situation that lays off millions of people and imposes crippling inflation, that wouldn’t be great either. My point is that Trump’s stimulus into a late-cycle US bull market is aimed at creating a sugar rush to ensure he gets re-elected, but it’s is burning most of the gas out of America’s tank.

The tax cuts are failing to cover themselves through growth and wages, primarily because they are being used to pay down corporate debt and buy back shares. There isn’t much upside left in this cycle, and if someone comes in 2020 and blows another hole in the debt ceiling millennials will be facing a terrifying tax burden in the future.

There is another interesting link, this time between AOC and Warren Buffett, who is working on trying to revolutionize US healthcare with Amazon and JP Morgan.

Their reasons for doing this are clear, as US healthcare on a global map is very weak. It is both extremely expensive and very average in its outcomes. Testing blood shouldn’t be costing the insurer $500, that’s just lunacy. By lowering costs, Buffett is trying to see if he can fix a broken part of American society. Its’s possible he’s vocal against Ocasio-Cortez’s spending plan because he fears a left-wing leader making his plans redundant.

In any case, here’s a fact check on some claims that Alexandria Ocasio-Cortez has made regarding the cost of0 “Medicare for All.”

BUFFETT ALWAYS HAS AN AGENDA, BUT IT’S A DIFFERENT TYPE OF GREEN THAN AOC

Never trust a billionaire, no matter how cuddly they look – their money will always guide their agenda. It is, after all, their life’s work. Buffett has a way of letting his money guide his opinions. If he is getting restless about MMT, we should probably also be concerned. The fact that he has a vested interest in healthcare staying private is another thing to consider when weighing his soundbites.

AOC and Trump love spending because they can demonstrate activism to their voter base. The problem for AOC’s supporters is they tend to be younger, and they will bear a greater financial burden than Trump’s core demographic when the debt blows up.