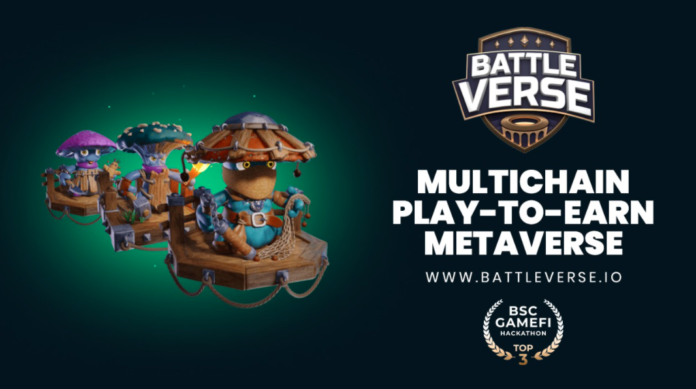 BattleVerse, a free P2E online game powered by DeFi x NFT and blockchain technology is all set for its IDO and CEX listing, however, in the run up to its listing it has forged several new partnerships. Some of the key partnerships include Equinox, a trading platform that will not only host the IDO, but also be one of the backers of the project. The firm has also partnered with Seedify, a Blockchain Gaming focused Incubator and Launchpad that will also host the IDO. Magnus Capital provides full range of support including funding, market-making, and marketing leveraging. BattleVerse has secured many other important partnerships as well.

The game is confirmed to be launched on these platforms:

BattleVerse is a user-driven platform that empowers them by paying for their participation and enjoyment. Through the use of novel tokenomics, finance, and games. This platform also combines the finest of decentralized technology utilized in DeFi and NFTs, such as blockchain and AI, to build a genuinely unique and everlasting FREE TO PLAY, PLAY TO EARN ECOSYSTEM. This game allows users to earn money while they’re playing. BattleVerse uses blockchain to provide transparency and a fair payment procedure. The goal is to strike the perfect balance between centralized and decentralized worlds, and BattleVerse must provide beautiful gameplay and transparent payments so that the users can earn money on their own time!

Online entertainment is a cutthroat business, with monopolistic firms vying for data, attention, and money. Several of these businesses have turned to gamification to keep their customers engaged. This may be accomplished in a variety of ways, such as gathering additional points by going the extra mile with AppleWatch or acquiring levels on their favorite shopping app in order to track down the next big coupon and bonus points. All of these systems, apps and features are meant to keep users interested in what’s coming next. ‌Players spent almost $45 billion USD on games in the first quarter of 2021 but received a stunning $0 in return. This is where the BattleVerse universe comes into the picture. Heroes who are one-of-a-kind are lovely and great. Use them in Arena fights or trade them in exchange.

What Makes Battle Verse Stand Out?

The project’s main goal is to create a decentralized game that can run on its own. DeFi apps have shown amazing growth and rapid development during the last 1.5 years and more than 3 years as DApps, particularly in the last six months. The DeFi market is rapidly expanding and is expected to exceed $28 billion in value this year. BattleVerse believe that a decentralized gaming world and economy provides the best fusion between crypto/blockchain/DAO enthusiasts and gamers seeking open access without corporate interference, and BattleVerse recognises that the real world and the decentralized world have some differences, so BattleVerse developing tools to bring them together in an optimized and very unique way.

The cost of completing transactions on the Ethereum network is one of the main difficulties that NFT applications and users are now facing. Due to the limited number of transactions that Ethereum can process, users have bid up gas fees to ensure that their transactions settle promptly. Trading volume for NFTs has decreased as the average cost of transferring an NFT has risen to $15 at the time of writing. Polygon changes this by employing a Zero-Knowledge (ZK) Rollup, which allows users to work with their NFTs without incurring gas expenses. Aside from the cost savings, there are a number of other advantages to this.

The standard paradigm of most NFT games had grown dull and ineffective from the outset. Purchase a digital asset, own it, and hope for a return on investment. Some games let users purchase NFTs and then use them in a game. While the experience had improved, users still felt there was more to it. There needs to be a method for the players and their collections to form an emotional bond. BattleVerse wasn’t the only one who noticed the gap and saw the opportunity but wanted to offer the most unique and original solution: an emotional experience that was continually fascinating and fulfilling throughout the entire process, from discovery to exchange.

The BattleVerse world consists of isolated regions-planets according to the type of conditional races, where six most diverse types of creatures with recognizable features from mythical and real worlds live, develop and compete. This universe is divided into Inner and outer worlds, with inner worlds representing the home planets of characters of the same species and outer worlds that are controlled by the Quzers.

Intergalactic tournaments are regularly held for the strongest fighters of all races. This tournament is the place of the main battle of players from all over the BattleVerse universe. Winner gets the opportunity to breed their Champions with other races of the BattleVerse.

Users will come across wild, adaptable, and belligerent creatures in BattleVerse. They can travel around BattleVerse’s numerous areas and territories, fighting and capturing them. To do so, they’ll need a $QZQ, which is an in-game token that allows users to expand their territory, engage in combat. The growth speed and the quality of heroes are determined by the quantity of $QZQ users have.

BattleVerse‘s world is enormous! It has something to suit everyone’s tastes. Someone will eventually opt to fight in battles for monetary gain and improve their fighting personas in order to face the best of the best in the Intergalactic Tournament. Someone will opt to be an explorer or a well-known merchant across the galaxy, capable of selling rusted hardware to any robot. Many will become proprietors of industries and plants, as well as underground mycelium fields and strange groves, bringing in a steady stream of money. And the luckiest or most successful players will be able to breed their playable characters and make truly distinctive, humorous, and loyal pals.