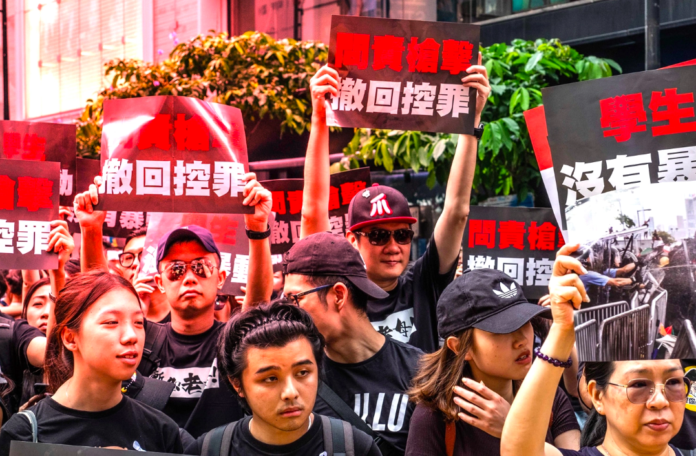 Right now, thousands of citizens from Hong Kong are protesting certain leaders and opposing a proposed extradition law. Alongside the protests, the country’s political issues are reportedly pushing wealthy Hong Kong residents to move their capital offshore. Since last week, the price of bitcoin core (BTC) has gained a premium in Hong Kong as the digital asset has been trading between $75-150 higher than the global average.

Tens of thousands of Hong Kong protestors have filled the streets of downtown Victoria Park and started marching toward government buildings on Sunday, June 16. The crowds of people dressed in black have been chanting things like “resign” and “withdraw” due to their hatred for the proposed extradition law. The ruling would basically allow Chinese authorities to come in and extradite any Hong Kong citizen to mainland China if they are accused of a crime. It all started in 1997 after Beijing took over and promised to keep Hong Kong’s government intact under “one country, two systems.” Before 1997, Hong Kong was a British dependent territory but the sovereignty over Hong Kong was transferred to China. Everything was fine up until 2014 when pro-democracy protests called the Umbrella Movement stirred the Chinese government and things have never been the same since.

Crypto proponents believe the current political strife will push more people toward decentralized assets. The protesters demand that Chief Executive Carrie Lam resigns and withdraw her plans to initiate the extradition law. “Our demands are simple. Carrie Lam must leave office, the extradition law must be withdrawn and the police must apologize for using extreme violence against their own people,” John Chow a Hong Kong-based banker, told press on Sunday. Additionally, a few days ago, Reuters reported that wealthy Hong Kong residents have started moving funds offshore to escape possible economic turmoil.

“Some Hong Kong tycoons have started moving personal wealth offshore as concern deepens over a local government plan to allow extraditions of suspects to face trial in China for the first time, according to financial advisers, bankers and lawyers familiar with such transactions,” Reuters explained on June 14. One specific tycoon who wished to be unnamed revealed that the capital outflow has “started,” adding:

In addition to the wealthy individuals moving capital, crypto enthusiasts have noticed a premium on BTC growing larger in Hong Kong. For instance, over the last few days on the cryptocurrency exchange Tidebit, the price of BTC has been $75-150 higher than the global average. At the time of writing, 1 BTC is currently 73,100 HKD or US$9,337 in Hong Kong which is more than $100 higher than the Bitstamp price at $9,230. Speculators believe the unrest in Hong Kong has sparked some flow into bitcoin so people can hedge against uncertainty. Other exchanges such as Bitpoint and Liquid show similar BTC/HKD premiums as well.

There’s also been some demand in Hong Kong for bitcoin cash (BCH) on Local.Bitcoin.com as there are buyers looking to purchase BCH in person for cash and alternative payment methods as well. On the data aggregation website Coin Dance, BTC/HKD volumes have been rising week after week on Paxful as well. It’s difficult to say how the Hong Kong government will handle the large protests and whether more money will flow into the crypto economy. As of right now, Hong Kong is not China and they are still two very distinct systems but many citizens fear that some day that will change.