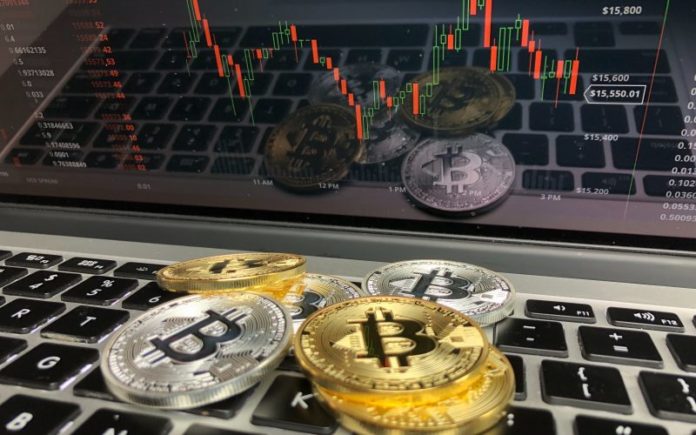 As many of you may know, the value in a cryptocurrency comes from the community. If nobody is using a particular coin (or working on the software), it becomes worthless; and if everyone is using it, then the value of the network will be very high. The underlying assumption here is often cited as Metcalfe’s Law, but it goes deeper than that.

Well, in the world of cryptocurrencies, we can’t say for sure. The market may be irrational, and it’s likely to remain that way for some time. However, this simple scenario illustrates an important point; it’s not always clear if the community behind a coin is small and active, or large and inactive. Furthermore, it’s not always clear how many users there are. With Bitcoin, for example; you can count the number of wallets, or the number of Bitcoin addresses, but we may never know for sure how many individuals are behind those wallets or addresses.

The Primacy of Bitcoin

I spend a lot of time thinking about Bitcoin and studying data from the Bitcoin network. Why? Well, for one it’s the oldest, still the largest in terms of market cap, and produces abundant data. Some of the newer coins just don’t have the tools in place to do any kind of serious research. I contend that if you want to understand cryptocurrency in general, you need to start by understanding Bitcoin. Only then will you have any kind of framework with which to understand the cryptocurrency market at large.

Let’s talk about our current situation. We’re in a bear market. Many have speculated on the price bottom, where is it? Have we already passed the bottom? Is the next boom around the corner?

In order to answer these questions, let’s look at the past. Specifically, Bitcoin’s past and what happened during the last two bubbles.

There are three ways that I have seen people try to apply Metcalfe’s Law to Bitcoin. Since we don’t know how many users there are, you could take the UTXO set (reasoning that a user has at least some Bitcoin), the daily volume moved on chain (this is what Willy Woo does with NVT), or you could use the number of daily transactions. Using the number of daily transactions is an approach that I pioneered. Here’s how it works:

Now, we can do a lot of fun stuff with this data. The first thing that comes to mind is creating a chart of the predicted price from the regression analysis and comparing that to the actual price. See below: 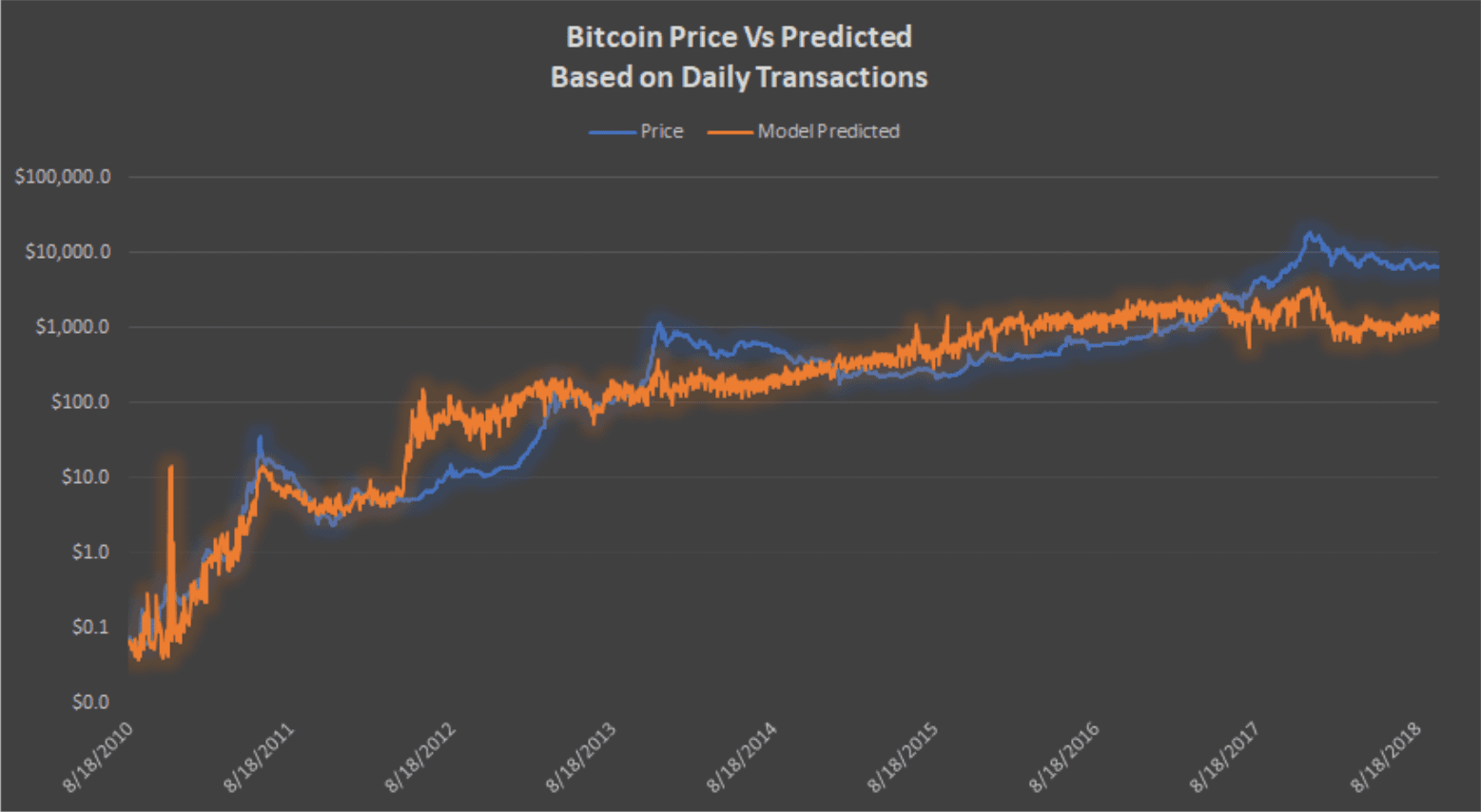 I could spend all day talking about the implications of this model, but the important thing here to note is that there is a high level of correlation between these data in log scale. Also, even though the current price of Bitcoin exceeds the model’s prediction, did you notice how the orange line has turned up since about April of this year? Why do you suppose that is?

Well, the number of Bitcoin transactions bottomed out in March of 2018 and has been increasing ever since. Consequently, with growth in the number of transactions, the price predicted by the model increases. See below: 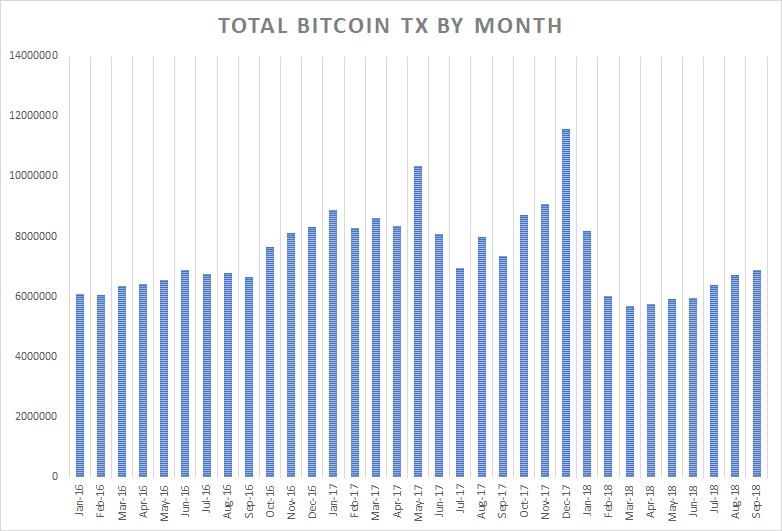 So, now that we know the number of daily transactions is highly correlated with the Bitcoin price, would it be crazy to think that this same idea might apply to other cryptocurrencies? Let’s have a look.

As I mentioned earlier, one problem with doing deep analysis on cryptocurrencies is that many of them are so new, the tools and data simply don’t exist yet. However, I ran a similar comparison between transactions and price with Ethereum, and I did find a striking (although experimental) relationship. Why do I say experimental? Well, Ethereum is only three years old. With Bitcoin we can go back eight or nine years. With a data set that’s smaller, my confidence in the output is also somewhat diminished. See below:

If you don’t have a background in statistics, don’t worry; I can sum up quickly. There is a very strong relationship between the number of daily transactions and the price of ETH in log scale (remember, we have to think in log scale with cryptocurrencies).

This is interesting indeed, but what can we do with this information?

Bitcoin’s Daily Transactions and Response to the Last Two Bubbles

Based on the fact that daily transactions have something to do with the price, is it possible to look at the change in daily transactions to try and find a bottom of the cryptocurrency market? Well, with Bitcoin the answer seems to be yes. However, many other cryptocurrencies are so new, that they haven’t been through a full bubble cycle yet. 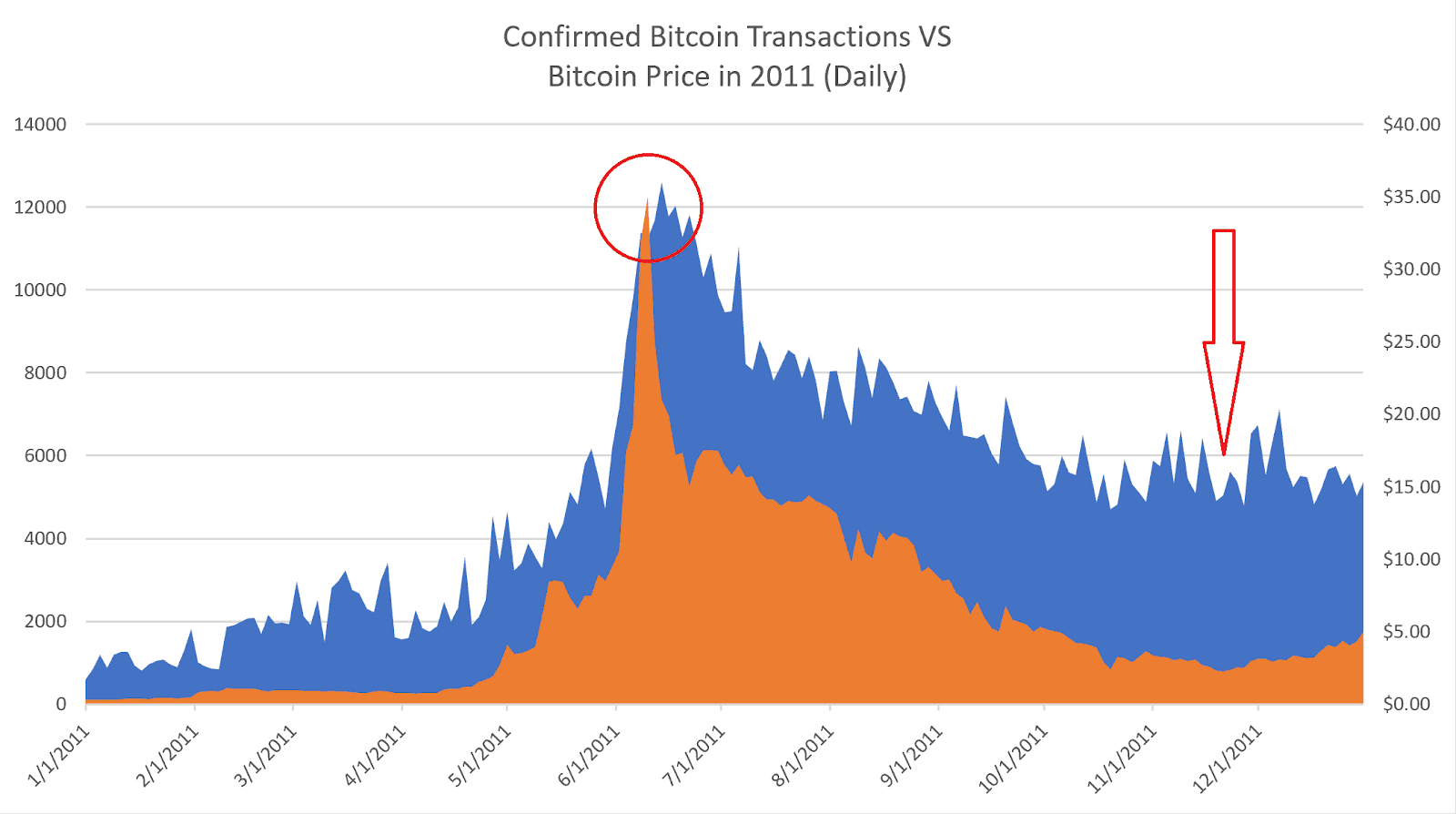 The first major Bitcoin bubble was in 2011. Look at how closely the number of daily transactions (blue color, left axis) corresponded with the Bitcoin price (orange color, right axis). The price bottom and the daily transaction bottom were within days of each other. 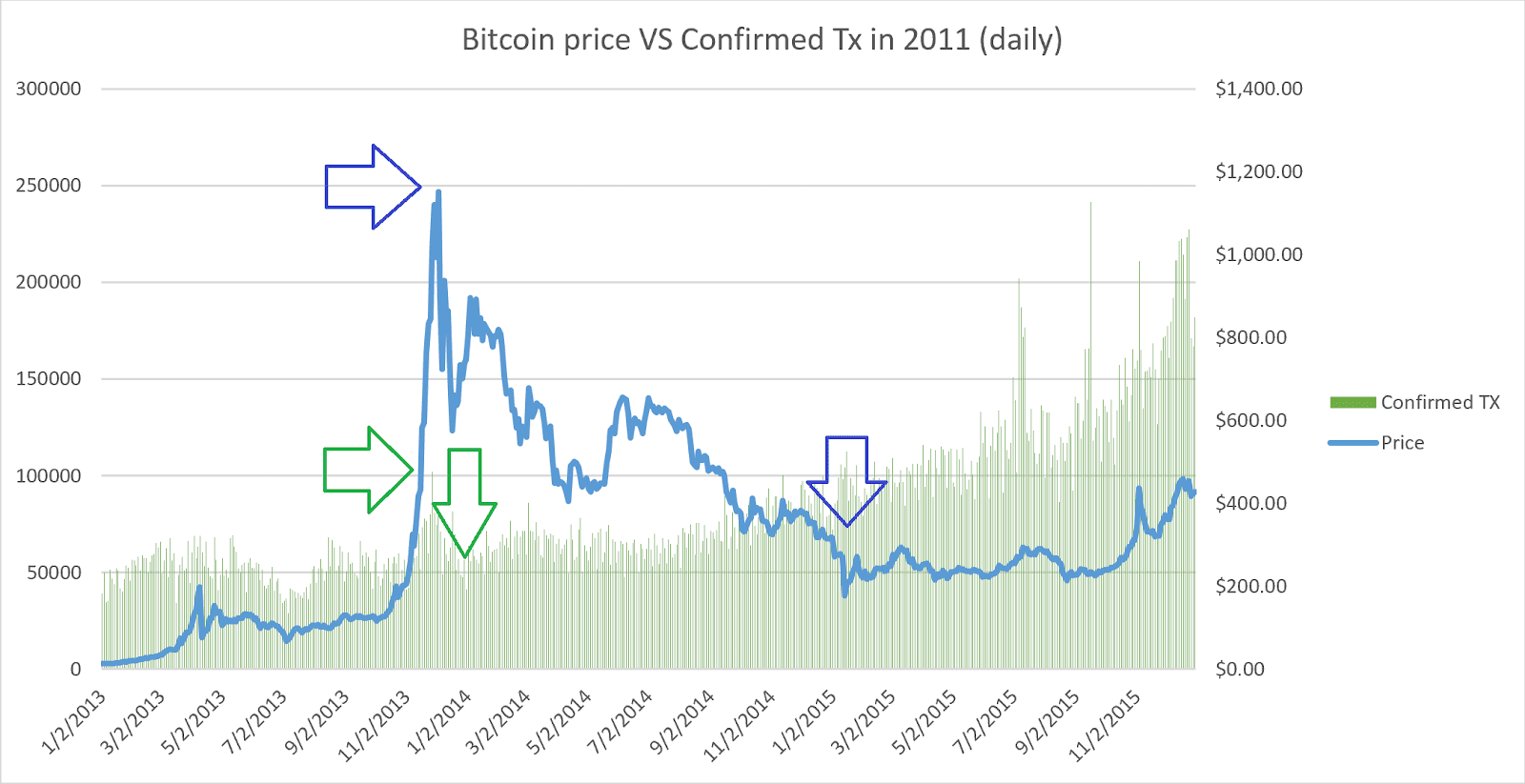 Let’s look now at what some of the top cryptocurrencies have done this year in terms of their daily transactions. We already saw that Bitcoin bottomed out in March/April, but what about XRP, ETH, ZEC, and XMR?

XRP looks like it had a bottom in September, but it’s hard to tell if we’re in recovery mode yet. I think the jury is still out here.

The same thing seems to be going on with Ethereum. There appears to be a transaction bottom in late September, but it’s too early to tell if another bottom is on the way.

At the risk of sounding like a broken record, if ZEC has bottomed out, then it was only very recently in August. There does appear to be a slight increase in activity, but I’m not convinced we’re out of the woods yet.

Now, I’m just going to stop here; because at this point you may be thinking to yourself; “Hey, wait a minute, why do all these charts look so similar?” Recall that the cryptocurrency market exhibits high levels of price correlation. This relationship has been exceedingly strong in the last 180 days.

Due to the high levels of correlation between many of the top cryptocurrencies, it is not surprising to see that the number of daily transactions also exhibits similar behavior.

Based on this information, I call into question the merit of technical analysis on many of the top cryptocurrencies. After all, if the entire market moves together, how can we predict a single coin’s price in the future when we view it in isolation? The only exception to this rule might be Bitcoin, due to its size and scale. If Bitcoin drives the market, which I believe it does (and to a lesser extent Ethereum), then it would be a mistake to build any model that excludes their influence on smaller market participants.

Author: I write articles on Seeking Alpha, and also host a marketplace called Crypto Blue Chips. As a cryptocurrency entrepreneur and former software engineer, I bring a unique perspective to cryptocurrency investing that involves hands-on experience from running a cryptocurrency mining business (BTC Northwest) and a private investment company focused exclusively on cryptocurrency. You can find me on Twitter here.