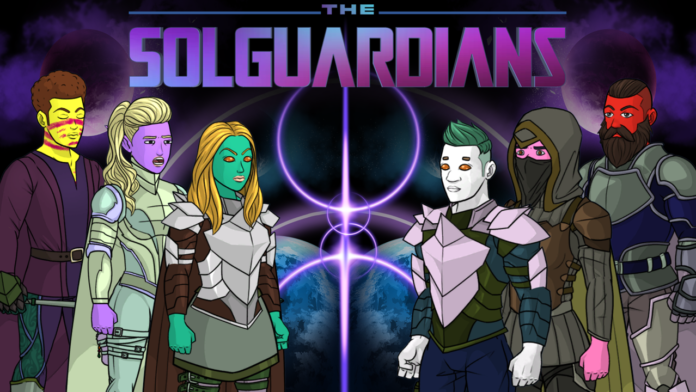 SolGuardians is revolutionizing the finance and entertainment with a powerful new approach to crypto and non-fungible tokens.

If you’ve been keeping up with crypto, or just watching your evening news, you’ve probably heard about the NFT craze sweeping the world.

NFTs are non-fungible tokens that come in the form of music, art pieces, and other digital properties, and buying the right ones at the right time has made quite a few overnight millionaires over the last year or so. More excitingly, they’re not just boring crypto assets. NFTs are highly versatile, and they’ve ushered in a completely new form of interactive entertainment: P2E gaming.

P2E gaming uses NFTs to create an exciting gaming opportunity where you can not only enjoy building overpowered characters to destroy the competition, loot awe-inspiring set pieces, or simply sit back and chat with other players, but you can also trade those characters and in-game items or sell them for real-world currency.

That’s right, you can now make real-world profits from gaming.

However, every P2E game isn’t made equally. Just like the core gaming industry, different developers are either leading the charge or just pumping out crap.

That brings us to SolGuardians: The hot new P2E game that has perfectly blended the profitability of NFTs with the thrill of a well-designed and fun-to-play game. 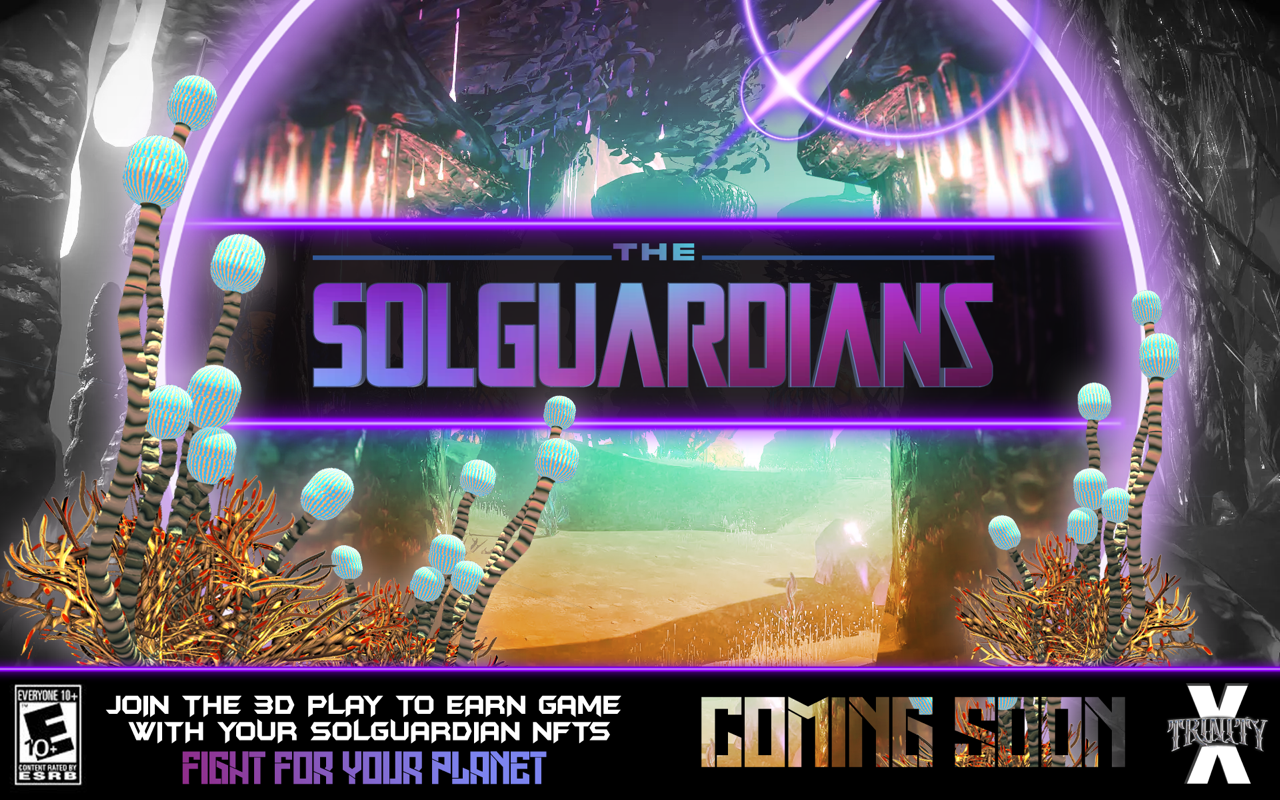 SolGuardians is an upcoming P2E game aiming to bridge the gap between the crypto world and gaming, and the crypto vets helming the project are using NFTs to make it happen.

When you purchase a SolGuardiansNFT, you’re given a ticket that grants you access to the game. Only 10,000 SolGuardians will be minted in total to ensure that this gaming community is highly exclusive.

Each SolguardiansNFT is an in-game character with its own unique traits, characteristics, and artistic differences. When you activate your ticket and join the game, you’ll start with a newbie character and guide it through the world of SolGuardians.

Each level you complete, upgrade code you earn, and tournament you win will give your character a multitude of in-game bonuses just like any other game, but there’s a twist: Those bonuses increase the value of your NFT, too.

This clever game design innovates the gambling-style approach of pretty much every other P2E game, and it makes it possible for you to get paid, not based on luck, but just for enjoying the game.

Investors who jump in early have the potential to not only enjoy a hand-crafted gaming experience while it’s fresh, but they also have the best chances at earning high ROIs on their NFT investments.

Since the number of NFTs minted is so limited, they’ll sell out quickly and lock in the gaming community until someone sells their SolGuardian on the secondhand market or trades it for another NFT.

By the time people are willing to end their time in SolGuardians and sell off their characters, they’ll have likely poured time and energy into the game and increased the value of their NFT dramatically.

To help you understand a bit better, let’s look at it through the lens of the traditional gaming market.

Let’s say you buy a copy of Skyrim and load it up for the first time. You have a fresh character, and let’s say it’s worth the $20 you paid for the game on the used market. You get immersed into the world, pour 100+ hours into it, and you end up with a level 150 warrior that stomps everything it comes across. Now, imagine you could sell that character to another player when you’re finally ready to put the game down for good, and all your time and effort is accounted for in your asking price?

That’s exactly how SolGuardians works thanks to its use of NFTs for in-game characters. This ensures that you’re not just buying a game and pouring time into it. You’re making a genuine investment and having fun with it at the same time.

As SolGuardians develops, NFTs are sold and traded, and the game picks up steam, everyone will be able to profit. However, the progress-based value system means that early adopters will have a massive advantage.

Only 10,000 SolGuardianNFT assets will be minted in total, and once those are bought out, new players will have to purchase their NFTs, or in-game characters, second-handed; long after early adopters have already progressed through the game considerably and raised their characters’ prices dramatically.

By hopping on the bandwagon early, you get to buy your SolGuardiansNFT at the lowest possible price; making your long-term ROI far higher than someone who buys the NFT later and sells at the same price as you do.

You’ll also gain access to the first tournaments and events released for the game, have access to prize pools during the early stages of its release, and a ton of other perks.

To make these early adoption bonuses even more exclusive, the first 3000 NFTs will be available early through a whitelist pre-sale. Then, the remaining 7,000 NFTs will be minted in a couple of days afterwards. Getting involved during the pre-sale is the best way to guarantee you have a head start.

Get Started with SolGuardians, Quick 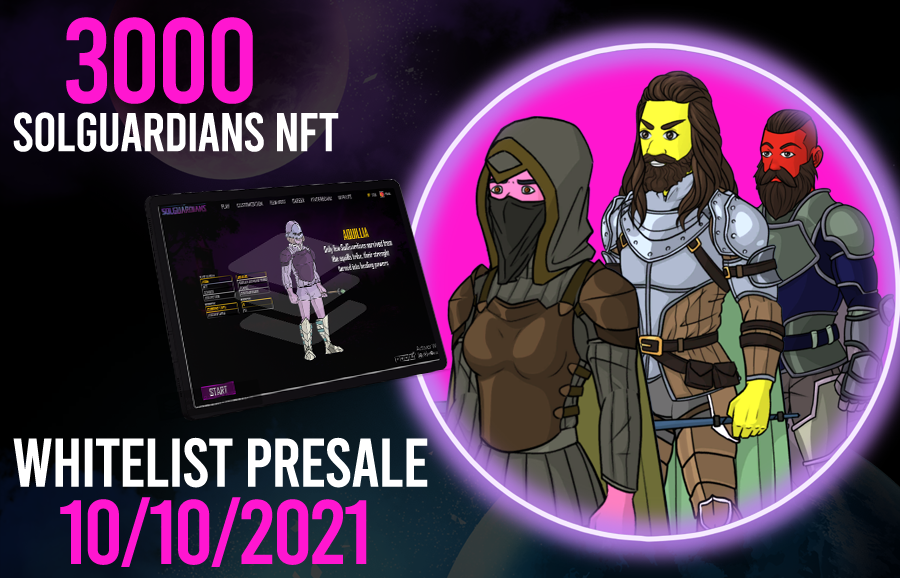 SolGuardians is bound to take the NFT world by storm, and we wouldn’t bet against more headline-worthy NFT stories coming out of it soon. The devs are crypto vets who got their start investing in tokens and NFTs just like our readers are now, and they’ve used their combined knowledge to create a game that reinvents how people see the P2E game scene.

Anyone interested needs to know a few things first, though.

The whitelist pre-sale is the best deal you’re going to get, and only 3000 NFTs will be minted. So, head over to the SolGuardians website and fill out the form necessary to hop on the exclusive whitelist. On 10/10/21, you’ll be able to mint your SolGuardiansNFT before anyone else.

Whether you get in on the pre-sale or wait for the sale to go public, you’ll need a Solana wallet and access to the Solana blockchain. The NFTs are part of the Solana blockchain, and payouts for NFT sell-offs, prize pool winnings and crypto rewards will all be paid in Solana crypto. Of course, you can convert your tokens to your preferred crypto once you get them in your wallet, but Solana is a key part of SolGuardians.

Finally, this is a relatively early part of the dev team’s roadmap. While you can begin minting your NFTs on October 10th through the whitelist pre-sale, the game won’t launch until later on. You won’t be able to take your newly minted SolGuardiansNFT and start playing on the 10th, but you will have a unique digital asset and a reserved spot when the game goes live. On day one of launch, you can log on and start increasing the value of your NFT before everyone who waited.

SolGuardians is Destined to Take Off; Be One of Its Success Stories

SolGuardians isn’t just any old P2E game. The devs know what they’re doing. Not only have they done away with the questionable, poor design decisions of early P2E games, but they’ve meticulously designed SolGuardians from the ground up to turn your crypto investments into a gaming experience that will catch the attention of investors and players alike.

This innovative approach by the SolGuardians team is bound to fill news headlines with even more NFT success stories. If you’re a crypto investor who’s sleeping on this opportunity, you’re missing out.

Check them out at their: